This Chart Says Stocks Have Plenty More Downside Ahead

Editor's note: Yesterday in Empire Financial Daily, we shared insights from Greg Diamond over at our corporate affiliate Stansberry Research. Today, Greg is back with more details – originally shared with subscribers to his Ten Stock Trader service – about the situation in stocks and precious metals...

During my time trading on Wall Street, I learned many valuable lessons...

I always try to share as many of these as I can with my Ten Stock Trader subscribers. But right now, there's one lesson that sticks out above the rest...

Always have a plan.

Right or wrong, you have to make sure you know what you're going to do as a trader.

I often stress that the market doesn't care what any of us think. It's going to do what it's going to do. All we can do is react.

Therefore, it's important to have a plan.

This is why it's so crucial to follow your stop losses and use risk-management principles, too.

As I explained yesterday, most stocks are in a bear market right now. It's an ugly reality... whether some people want to admit it or not.

That's simply my opinion. But today, I want to cover the facts based on the current setup in stocks, the dollar, and precious metals. We must account for what's happening... and create a game plan.

I'm going to review the technical setups and show you what's possible – and if you're a bull, it's not good.

Technical analysis has no shortage of critics. But many who criticize it haven't put in the real work to see its value.

One aspect of technical analysis that gets plenty of criticism is Elliott Wave Theory ("EWT").

This methodology takes what seem like random stock-price movements and puts them into a set of rules. It's a "road map," if you will, of how a stock will behave over a specific period of time.

I touched on EWT briefly in yesterday's essay. In short, it's based on the idea that stock prices move in a series of five "waves."

There are three impulsive moves within a trend (up or down) and two corrective waves that counter the prevailing trend.

But here's the best part of EWT...

It helps with your game plan and it allows you to estimate the possibilities. In this case, it allows us to see how far stocks can fall.

Critics will say EWT is subjective because an analyst won't always get the wave count right. That's true, but if you follow the EWT road map, it helps you understand what's possible... as well as where you're wrong.

So let's use EWT to review just how bad it can get... 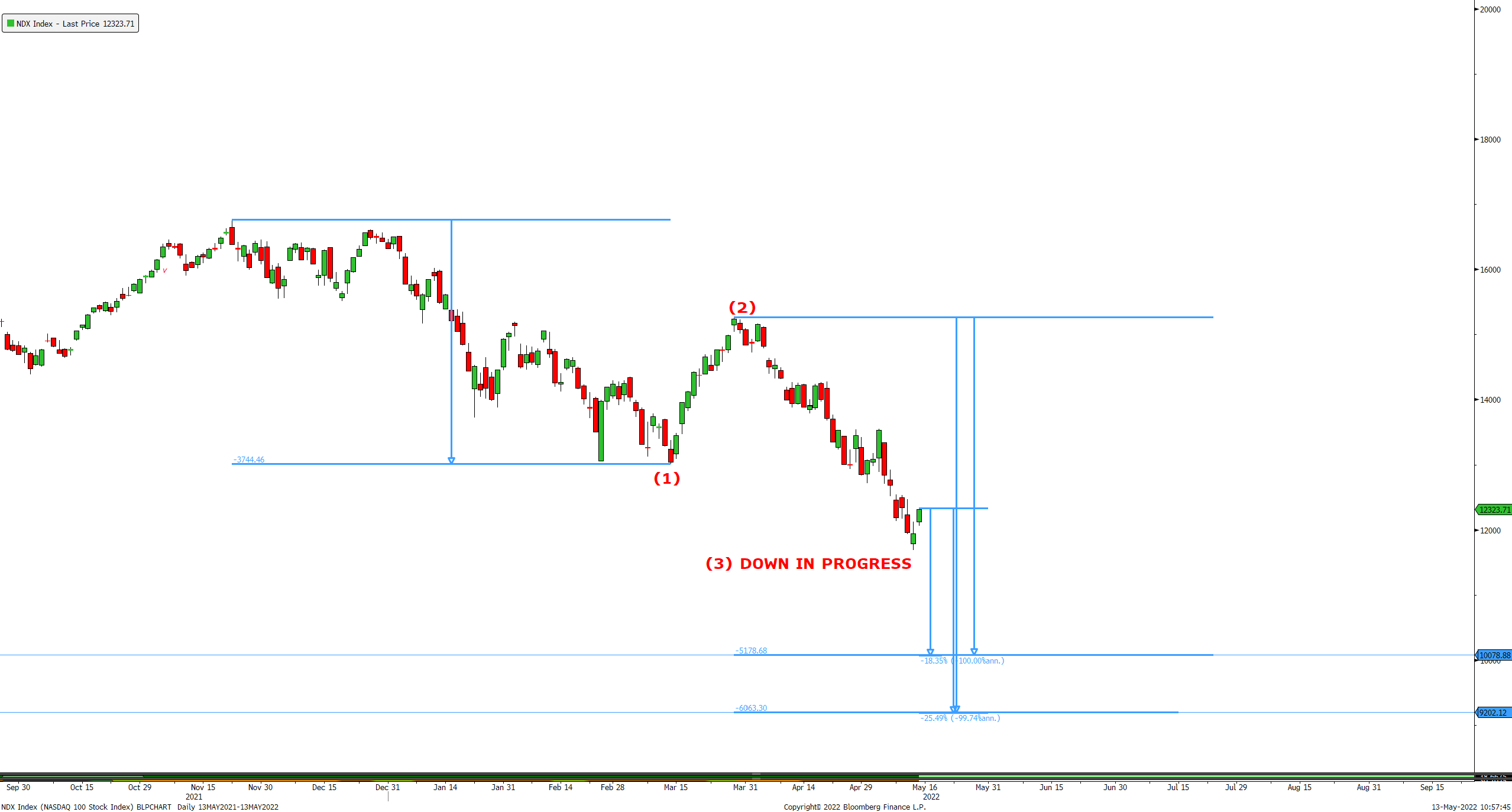 The EWT count is in red. The first wave down was from the highs late last year and early this year, which ended in mid-March. The second wave ended on March 29, and now the third wave is in progress.

This is where it gets ugly...

I won't get into the math, but my calculations show we could see 18% to 25% more downside from the closing prices on May 13.

I'll reiterate that I'm looking for a bigger relief rally over the next week or two, but I must account for the possibility that it won't happen. If so, we can expect the index to hit the targets above.

Both gold and silver have had a hard time over the past month. Despite record inflation and rising geopolitical tensions, precious metals are struggling. This is mainly due to the U.S. dollar... 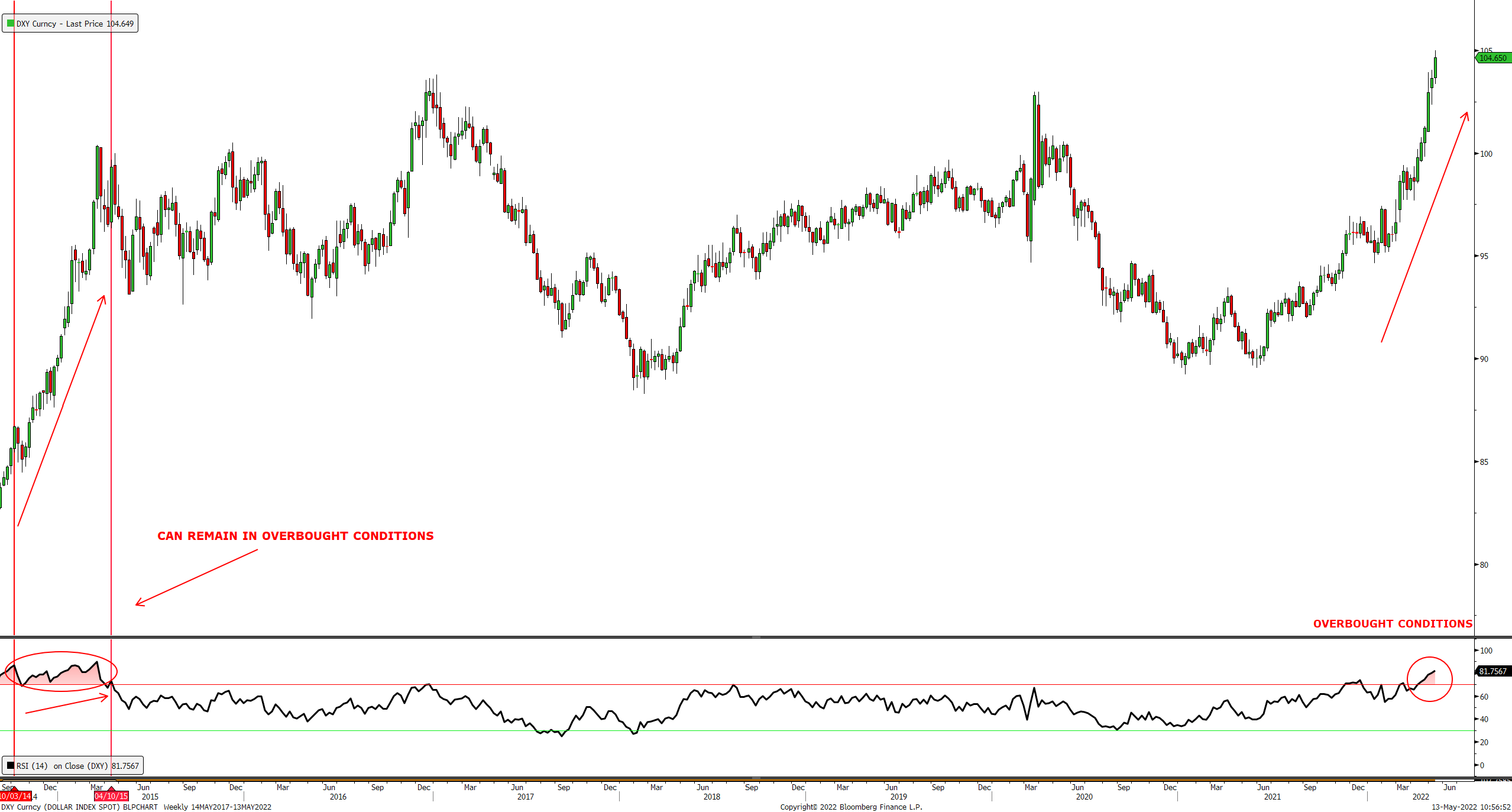 This is a weekly chart of the U.S. dollar. As you can see, the rally of late is strong. The relative strength index ("RSI") at the bottom of the chart is in overbought territory. So you can say it's going to top out soon. Well, maybe...

Look to the left side of the chart. I note where this same phenomenon occurred back in 2014 to 2015. The dollar rallied sharply, but the RSI remained in overbought conditions for quite a while.

This is why I often tell my subscribers that they can't rely on just one indicator or method. You have to look at several different factors to get the full picture. Now, as the chart above shows, the dollar did just make a new high. Perhaps we'll see a pullback in the short term.

This is where we look at the respective technical setups in gold and silver... 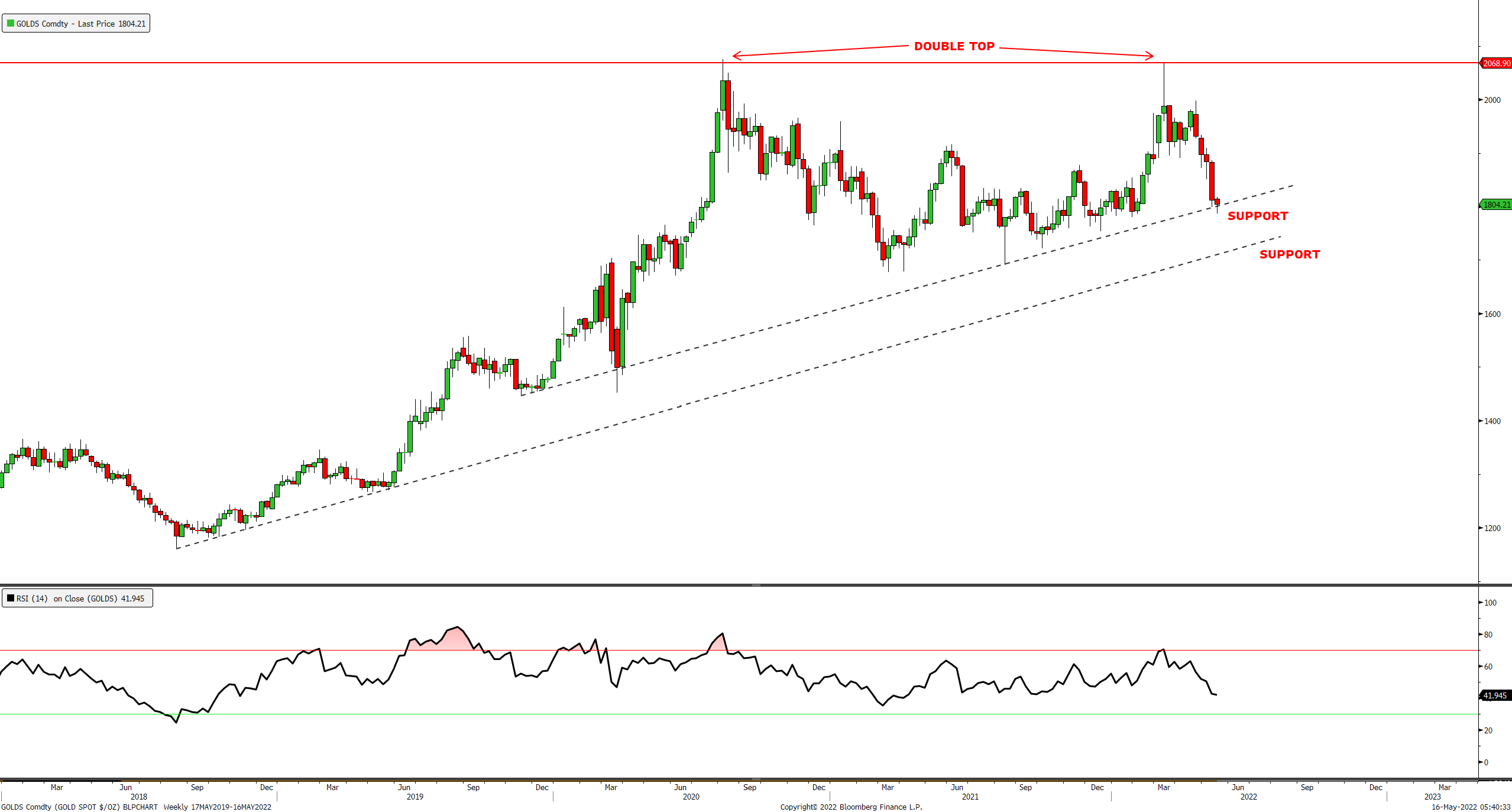 Gold topped out back in March after the initial surge when Russia invaded Ukraine. Since then, the metal has been in a short-term downtrend.

Now for the good news... Gold is still in a long-term uptrend, as noted on the chart. The black dashed lines are acting as support, and the metal just bounced off the first recently.

So in the short term, it's certainly possible that we'll get a rally. But I don't see any extreme reading on the RSI at the bottom... And to be honest, I'll only start to get very bullish with a break above the "double top" labeled on the chart (a significant resistance level now) near $2,075. 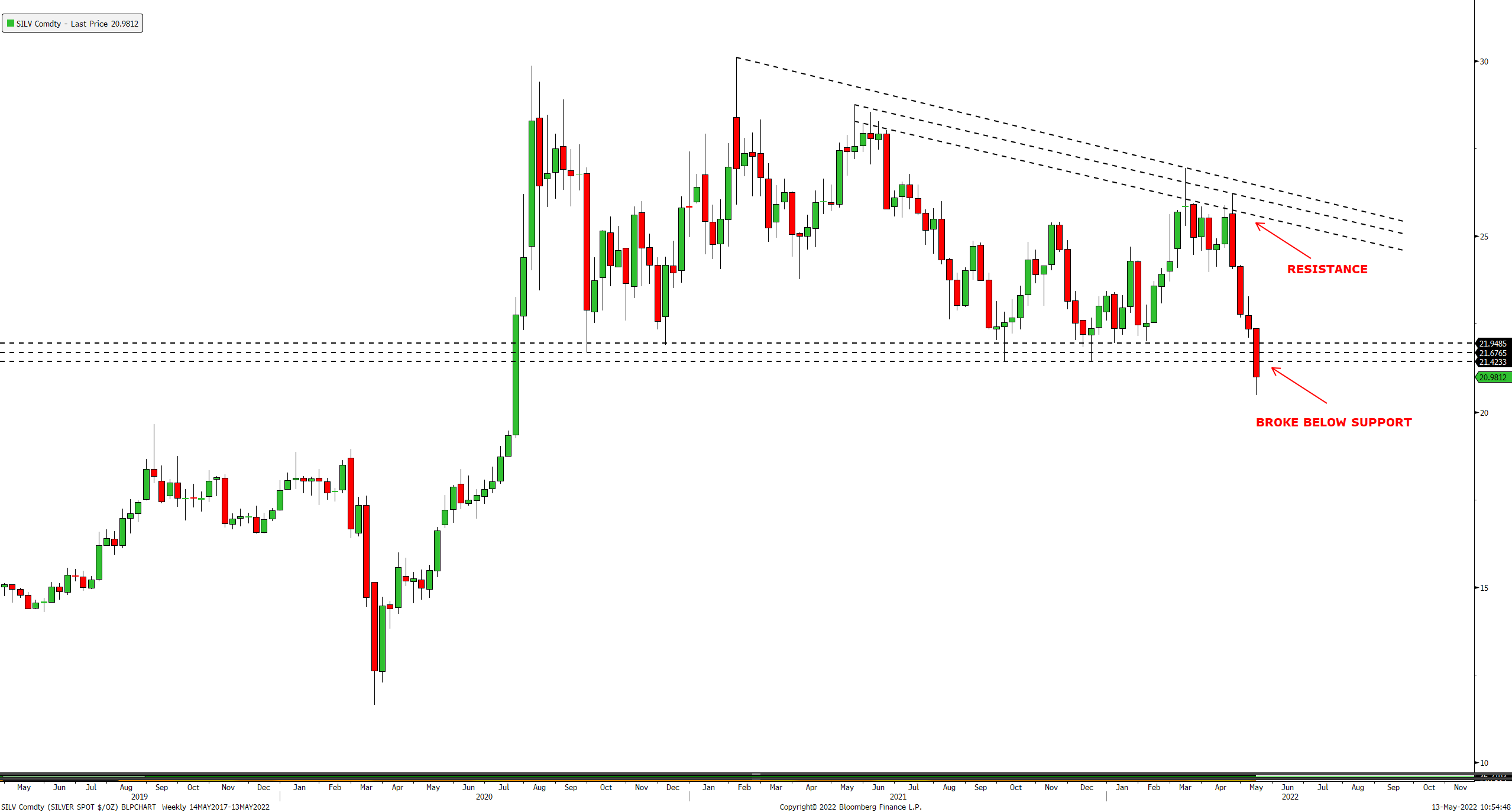 It's simple stuff here. Silver is still in a long-term uptrend, but you can see that it broke below support recently. Therefore, the $22 level will now act as resistance on a rally.

There's also significant resistance above that, with the downtrend in place since the high back in early 2021.

So at best, silver can chop around in between this support level and the resistance levels. At worst, the metal will continue to decline. It's just a tough call right now with the dollar so strong.

You can see based on this analysis that the precious metals sector is in no-man's land. It's not worth any options trading. And as I noted above, we can see some ugly price action in stocks. That means there will be lots of trading opportunities ahead.

Editor's note: According to Greg, a massive "aftershock" in the market is coming tomorrow, May 25... and if you have any money in the markets, you can't afford to ignore the evidence for where stocks are going next in 2022. As he says, what's coming could either cost you all your gains since 2020... or, with one move right now, you could set yourself up to double your money 10 different times without touching a single stock. Learn more here. 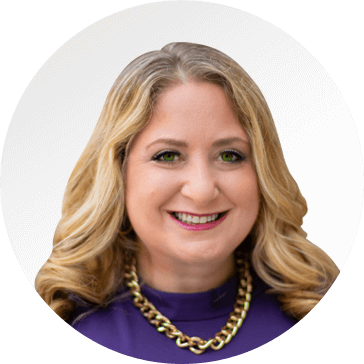 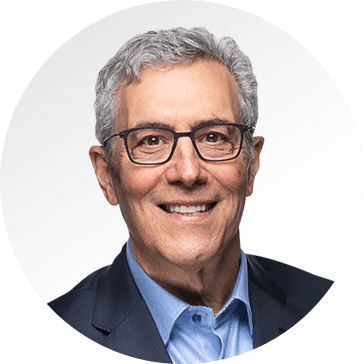 Each week in Empire Elite Trader, Enrique sends subscribers his favorite trading idea (or two) and commentary on the market. In addition, he sends out occasional urgent “buy alerts” to readers when he finds a trade that just can’t wait.